What does “bloom season” really mean?

We talk a lot about bloom season at Oakes Daylilies and for good reason– it’s our business. But not everybody speaks “gardenese.” (Yep. I just made up that word!) I’d like to explain what we mean when we talk about bloom season. Believe me: it’s not as simple as it sounds.

I was talking with someone the other day about daylilies. They were new to gardening, and mentioned they were interested in daylilies because they wanted to have flowers all summer long.  They wanted a certain variety of daylily because they loved the name, but I knew that that particular daylily was an early bloomer and didn’t rebloom. I asked them if they aware of that, but they just waved their hand at me and said, “Daylilies are summer flowers. They bloom all summer, right?”

‘Flutterbye’ is an early season bloomer.

Daylilies are summer flowers but they don’t necessarily bloom all summer long. Like most other perennials, daylilies are divided into seasons of bloom time. Early season means they’ll bloom earlier in the summer, mid-season bloomers bloom in the middle of summer…. you get the idea. The thing is, bloom season is not the same for one person as it may be for another.

Gorgeous ‘Back Draft‘ is a mid-season bloomer.

For instance, I’m writing this during the last week of April in East Tennessee. We’ve had a mild winter and a warmer than average spring. We’re just starting to see some of our early bloomers like Stella De Oro, Black Eyed Stella and Earlybird Cardinal come into bloom. For those folks who live in southern California, however, their mid-season daylilies are blooming right NOW!  If the weather stays like it is, we won’t see our mid-season blooms until mid June. Those who live in cooler zones to the north of us, in places like Chicago, for example, won’t get to see their mid-season bloomers for about  3 or 4 weeks after we do. 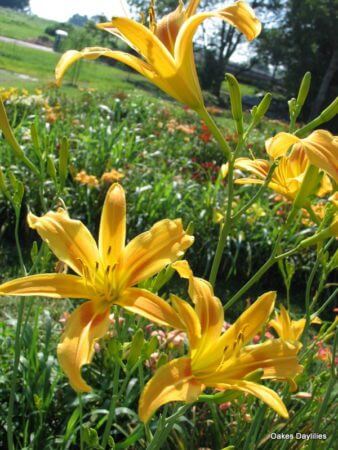 ‘Autumn Minaret’ is one of our latest blooming daylilies and, at 66″, is also the tallest we grow.

So you see? Bloom season is all relative.  We list the bloom season a daylily typically blooms for each variety on our website and in our catalog. (Want to see what bloom season your favorite varieties are? Find out here: early, mid and late. Or go to our website for more information.) If you want summer blooms all season long, you need to plant early, mid AND late blooming daylilies in your garden. Some rebloomers are also a great addition. What’s a rebloomer, you ask? Ah, my friend! That’s another post…

We normally include bonus plants equal to about 20% of your order. And these aren’t “leftover” plants, or “whatever we’ve got lying around.” These are the same huge, healthy plants we sell. Just leave the decision up to us— we’ll pick something we know you’ll love!

You can request a specific date:

You can request a specific date in the Order Notes box during checkout, and we will ship your plants as close to the time you request as possible.
We ship February — October.

Or we will send at the proper time for planting:

Winter and Early Spring Orders:
We will send at the appropriate time for Spring planting in your area. See the chart below for approximate starting shipping dates by zone.

Late Spring and Summer Orders :
After shipping has started to your area, we will send as soon as possible, normally within one to two weeks.
PLEASE NOTE – We will do our best to ship as quickly as possible, but the plants are growing in the ground, not sitting on a shelf, so it takes some time to get them dug and ready to ship.

Fall Orders:
We will send as soon as possible, up until it is too late to plant in your area. Orders placed after that time will ship the following spring. See the chart below for last shipping date by zone.